Over the past two years, government-imposed school closures, mass quarantines, and draconian mandates unleashed unprecedented generational harm upon American public school children, sending their math and reading proficiency plummeting.  Families found themselves without options as their students were relegated to an afterthought by union leaders more concerned about snagging federal stimulus funding and pushing political ideologies than student learning.

But earlier this summer, Arizona lawmakers heeded the call from parents and passed the strongest school choice program in the nation. Sponsored by Rep. Ben Toma, HB 2853 offers every child access to an Empowerment Scholarship Account (ESA). This program gives families a portion of the funding taxpayers would otherwise spend on their child in a public school to instead use for tutoring, private school tuition, at-home curricula, special needs therapies, and more.

Signed by Governor Doug Ducey, the bill is slated to take effect on September 24th, though union activists have pledged to gather signatures in an effort to block its implementation, while media and union leaders seek to undermine its prospects with falsehoods and half-truths.  To help navigate all this, here are 10 facts and features of the ESA program that every Arizona citizen should know:

1. ESAs will protect students from ever having to experience something like COVID-19 school shutdowns again. With access to an ESA, no student will ever again have to be locked out of school or subjected to mass quarantines, mask mandates, or the academic devastation of politically motivated policies that stuffed kids in front of screens rather than keeping them learning in the classroom. Every family will have the financial flexibility and support to access an alternative if their local school stops putting their children’s needs first.

3. ESAs make private education affordable for all families: ESAs put private education within reach of every family in Arizona, regardless of wealth. As of 2021, the median tuition rate of private schools in Arizona was approximately $6,600 for grades K-8, comparable to the typical ESA award value. This means ESAs fully or nearly fully cover tuition at the majority of private schools in the state. As of 2022, the typical student will receive an ESA scholarship of approximately $7,000. (Students with special needs will continue to receive even higher awards).

And for families interested in pursuing at-home education or tutoring for their own children, the ESA funds can help cover the costs of textbooks, curriculum supplies, and more. 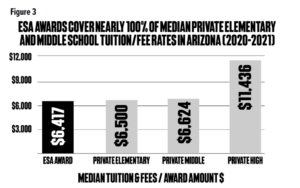 4. ESAs bring fairness and consistency by “funding students, not systems.” Opponents claim that ESAs “siphon” or steal money from a student’s local public school each time a child opts for an ESA. But in reality, under the ESA program, funding simply follows the student, just like it already does for charter and district schools via the state’s “open enrollment” system. Currently, anytime an Arizona student chooses to opt out of his or her local school district and instead go to a public charter school or a different school district, all of that child’s formula funding leaves the local school and goes with the child to the new school.

So unless ESA opponents believe public schools are stealing or siphoning money away from each other when students choose to take their funding to a different public school, then these activists already concede that funding should follow the student.  Indeed, the financial impact to a child’s local school is virtually identical, regardless of whether that child switches from it to a public charter school, to another school district, or to an ESA.

The alternative to this idea of funding following the student is to believe that a child should be forced to attend a school based solely on their zip code, no matter how well or poorly it would serve them, unless the child’s family has the means to buy their way to a better neighborhood or a into a better school. 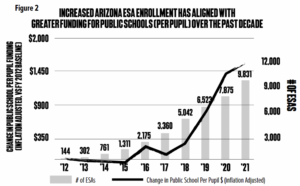 6. Private school choice programs mean better outcomes for kids in public and private schools. As just one of many examples, the left leaning national think tank, the Urban Institute, concluded in 2019 that “the country’s largest private school choice program [The Florida Tax Credit Scholarship], which enrolls largely low-income students from low-income schools, has a positive effect on college-going and graduation rates” among participating students.

Similarly, as reported in the Harvard affiliated journal Education Next, University of Arkansas Professor Patrick Wolf reviewed sixteen different studies of school choice programs, and found that they revealed an increase in student achievement “by an average of .13 standard deviations in reading by the fourth year after the study started….  The reading effect represents a gain of about four months of learning.”

University of California, Davis researchers have similarly found that even students who remain in public schools during the expansion of private school choice offerings see improvements in their reading and math test scores, and are suspended and absent less often.

Access to private education has likewise been shown to improve other long-term outcomes, like increasing the rates of intact marriages and reducing divorce, lowering student involvement in crime,  and improving civic engagement and tolerance of those with differing opinions.

7. ESAs save taxpayers thousands per student, millions statewide. Arizona public schools receive over $11,300 in funding per student per year from state and local taxpayers alone (in addition to an extra $2,000 in federal funds).ESAs, on the other hand, offer typical awards of $7,000, meaning they cost thousands of dollars less. Those savings go back to taxpayers (in the form of lower property taxes, etc.) and to the public school system (which also gets to keep a portion of the difference).

Our public K-12 schools currently receive so much in revenue that their per pupil funding is higher than the full cost of tuition and mandatory fees at a 4-year university degree program at Arizona State University. ESAs provide families access to education at a far lower cost than the traditional public school system. 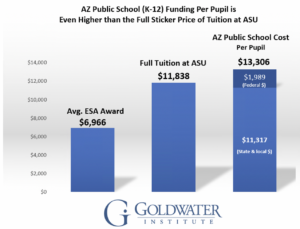 Every Arizona family has a state constitutionally guaranteed right to attend a public school at taxpayer expense. Families who choose an ESA get to pursue a great education for their children for less than it would cost taxpayers if they were in the public school system.

8. ESAs do NOT defund our public school system. ESA opponents have thrown out wildly false numbers about the impact of ESAs on public schools, claiming that they threaten the sustainability and wellbeing of Arizona’s public education system.

The reality is that even with universal eligibility, ESAs are projected to represent only a sliver of the funding that our public schools receive.   The nonpartisan budget analysts at the Arizona Joint Legislative Budget Committee (JLBC) estimate that roughly 36,000 students would switch from public schools to an ESA over the next 3 years, out of more than 1.1 million public school students.

At $7,000 per student, that means all of the children who are taking their funding with them from the public school system will receive ESA awards totaling about $250 million, or just 1.7% of the total $14.8 billion that our public schools are projected to receive in 2022-2023.

Moreover, their families already pay thousands of dollars a year in property and sales taxes, etc. to support other kids in the public school system, while bearing the full cost to educate their own children in private or home-based schooling.   The ESA program simply returns a portion of the taxes these families pay to help them direct the education of their own children.  According to the Arizona Joint Legislative Budget Committee, these students’ ESA awards are estimated to total just $125 million by 2025.

The chart below puts all of this into perspective and makes clear how bogus the complaints and scare tactics of union activists really are: 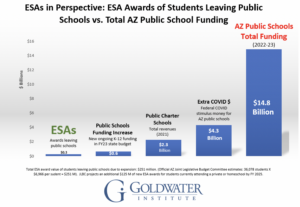 9. ESAs expose the hypocrisy of leftwing politicians and union activists. These opponents complain that ESAs and private education are unaccountable and inferior to public education, yet those same wealthy leftwing politiciansroutinely turn around and send their own children to private schools. This is a slap in the face to parents and comes down to the fact these elites don’t believe parents at large can be trusted to act in the best interests of their own children. These politicians claim that “they paid for private school themselves, so others should have to, too,” meaning they think taxpayer funded public education should be available for all, but private education should be accessible only to those who can afford it.

10. ESAs empower parents while leaving off the red tape: It’s true that the ESA program doesn’t impose bureaucratic regulations or testing mandates on families. It lets families and schools find quality curriculum resources of their choosing and doesn’t let the government dictate what materials they must use.

To apply for an ESA, go to https://www.azed.gov/esa , or to join other parents in defending students and the ESA program, go to: www.declinetosignarizona.com.   If anti-parent activists succeed in collecting enough signatures, the ESA program will be thrown into limbo and parents and students’ opportunities put on hold until the next general election.  It’s time to stand up for parents, students, and our state and say Yes to ESAs.

Matt Beienburg is the Director of Education Policy at the Goldwater Institute. He also serves as Director of the institute’s Van Sittert Center for Constitutional Advocacy.