Protecting a Nail Salon Artist’s Right to Earn a Living 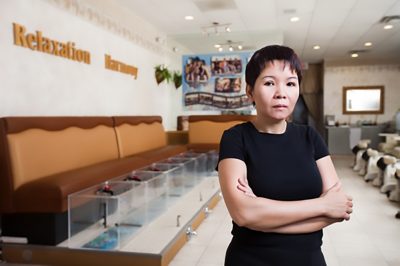 IN 2008, SHE MADE PLANS TO PROVIDE A SPECIAL THERAPY FOR FEET THAT USES SMALL CARP TO SAFELY NIBBLE AWAY DEAD SKIN.

Cindy Vong has operated a nail salon in Gilbert, Arizona since 2006. In 2008, she began providing a foot therapy popular in the Middle East and Asia which uses small Garra Rufa fish to exfoliate dead skin from the feet. Ms. Vong remodeled her salon to create a separate area where the foot treatment would be offered. She wrote an extensive policy on customer safety for her staff and legally imported the fish from China to launch the service. A number of Ms. Vong’s customers enjoyed the treatment and none lodged any complaints about it with her business or any state agency.

Inspectors for the state Board of Cosmetology visited the salon before she began offering the treatment in October 2008 and then again in November 2008, and raised concerns that the treatment wasn’t permitted under state regulations. In January 2009, Ms. Vong received an undated letter from board Executive Director Sue Sansom that accused her of violating the agency’s safety standards and said Ms. Vong could face criminal charges.

Ms. Vong responded in writing that neither the board’s regulations nor state laws were drafted to address this issue. The Board of Cosmetology’s current regulations relating to skin exfoliation were written several years before the fish treatment became a practice anywhere in the U.S. The regulations focus on the sterilization of “tools” used to treat skin, which obviously can’t take place with live fish.

Ms. Vong asked the board to use her spa as six-month test project so the state agency could write new rules that covered this practice. The board ignored Ms. Vong’s request.

In February 2009, the cosmetology board formally notified Ms. Vong that the state was considering possible civil or criminal penalties for offering the service. Ms. Vong signed an agreement with the cosmetology board in September 2009 and closed the fish spa as the board requested. Ms. Vong’s intent was to bypass what can be a lengthy administrative process so she could go directly to court and argue that the Board of Cosmetology had no legal authority to close down the fish spa or to punish her for operating it. But she was forced to lay off three workers and lost a substantial amount of income.

In November 2009, the Goldwater Institute filed a lawsuit against the Board of Cosmetology on Ms. Vong’s behalf. The board exceeded its statutory authority by unconstitutionally applying regulations to her spa fish business that, in this context, are not rationally related to a legitimate government purpose. The board violated Ms. Vong’s constitutional rights to due process, equal protection and the privileges and immunities afforded to everyone to make a living.