Topock Elementary School District, a small Arizona school district near the border with California, has four teachers and 100 students. Last summer, the state auditor found that a former district employee—a bookkeeper in the main office—had defrauded the district some $236,000.

This amount might seem modest compared to the $23 million Chicago Public Schools lost due to illegal activity by the superintendent in 2015 or the $35 million a California woman tried to defraud from a federal after-school program.

But for a small district—and the taxpayers that support it—$236,000 is a substantial sum. In fact, this figure is equivalent to what the district spends every year on teacher salaries.

That’s right, one instance of administrator fraud stole an amount equal to all the teacher salaries in the district.

Arizona teachers that went on strike earlier this year and called on state lawmakers to increase state spending on K-12 schools should ask their district office how officials are using existing school district resources.

My new report for The Heritage Foundation explains that state budgets are stressed due to increasing pension liabilities and Medicaid costs. State general fund spending accounts for less than half of the total spending per child in the U.S., with local taxpayer resources making up most of the rest.

Local school districts should be doing a better job with their budgets. Fraud in Topock is just the beginning. In Tucson, the district is using approximately half of the space available in its high schools. The auditor reports that the district’s plant operating costs are one-third higher than its peer districts (school districts similar in size). 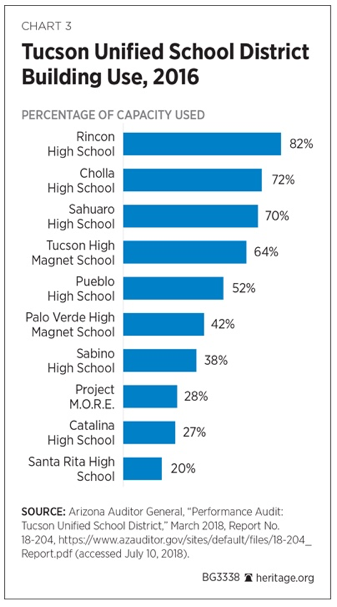 In Scottsdale, audits find that the district is using 66 percent of its available facility space. If the district leased or sold this space, officials could direct another $3.8 million to teacher salaries—enough to give every teacher in the district a $3,000 bonus or provide larger pay increases to the most effective teachers.

Arizona districts are not alone. In Oklahoma, where teachers also went on strike earlier this year, one building has sat vacant for so long that ghost hunters frequent the site. Oklahoma City spends $2.4 million per year to maintain 1,000 empty or nearly empty classrooms. If they sold or leased some of these facilities, they could repurpose that money to give every teacher in the district a $1,000 raise. Vacant buildings are a problem across the U.S., especially in large school districts.

Existing data on underused district facilities does not even capture all of the empty buildings. Pew researchers write that their 2013 study does not “include several dozen closed facilities that a number of districts have chosen to hold onto, a practice known as mothballing.” 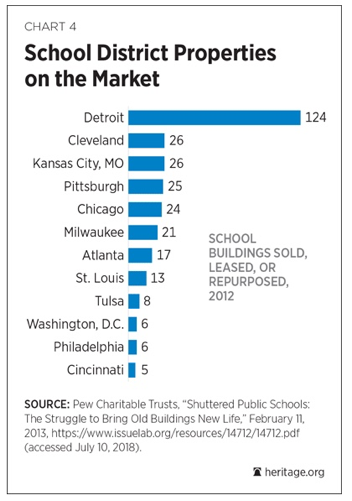 Teachers should also compare salaries with the school district administrators that approved school closures in 2018. In Kentucky, another state where teachers went on strike, a 2014 audit found that 150 district administrators in Jefferson County are making $100,000 or more. The auditor compared the district to five school districts in other states similar in size and found the next comparable district is Charlotte, North Carolina, which had just 50 district officials making six figures.

Problems related to student achievement and district finances have persisted for so long in Jefferson County, Kentucky’s largest district, that the state may assume control of the district.

The 2018-2019 school year has already started for some students, but teachers in a few areas have already gone on strike. In California’s Banning Unified School District, teachers have already closed schools. Strikes may be imminent in Los Angeles and Washington state. Before the end of the 2017-18 school year, teacher unions in Louisiana and Indiana, to name a few, made rumblings about going on strike in 2018-19.

Taxpayers and state policymakers should require districts to clean up their spending practices before providing additional resources. School district budgets should put students first and treat teachers like professionals.

Jonathan Butcher is a Senior Fellow at the Goldwater Institute.