What Are Certificate of Need Laws?

September 27, 2018
What Certificate of Need Laws are and why they don’t work

1. Certificate of Need state laws are a failed attempt to control medical costs.

Certificate of Need (or “CON,” for short) are laws in 38 states that attempt to control medical costs by limiting the supply of services and facilities to only what is needed, as determined by the state board or agency. Requiring government approval will prevent overbuilding and excess capacity, which drive up costs, the thinking goes.

The truth is, these laws haven’t worked as intended. CON laws did not limit the cost of healthcare. In fact, by eliminating competition from the healthcare industry, CON laws tended to drive up costs, lower quality, and limit the availability of needed services, according to a series of assessments from the U.S. Federal Trade Commission and Department of Justice.

2. Mental health patients and others are suffering because of certificate of need laws.

Mental health patients and those suffering from opioid addictions are not getting the care they need because of certificate of need laws, which hospitals and other healthcare providers use to eliminate their competition. 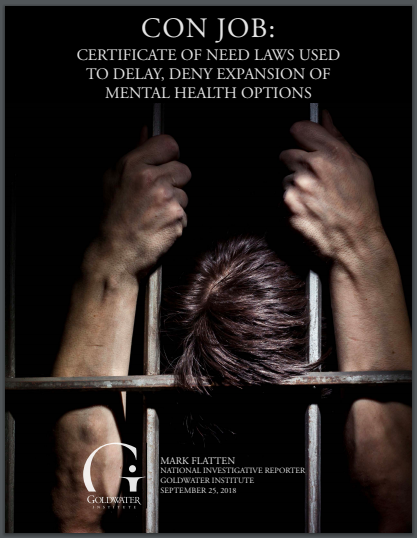 In CON Job: Certificate of Need Laws Used to Delay, Deny Expansion of Mental Health Options, Goldwater Institute National Investigative Journalist Mark Flatten reports on stories from Iowa, Oregon, and Tennessee, illustrating the damage that CON laws can do to mental health patients in areas where there is a demonstrated need for care that is going unfulfilled.

“The lack of competition caused by certificate of need laws allows existing providers to charge more for lower quality services,” Flatten said. “The people who end up paying the steepest price are those in need of treatments that, because of CON laws, are nearly impossible to access in their communities.”

3. The medical industry profits from anti-competitive certificate of need laws, while patients suffer.

The primary beneficiaries of certificate of need laws are existing providers of medical services within a state, which effectively use them to block competitors from encroaching on their markets, the federal agencies found. The results of that stifled competition are higher costs and lower quality, FTC commissioner Maureen Ohlhausen said in a 2015 analysis.

“These laws remain on the books in 36 states through a combination of legislative inertia and the fact that incumbent providers benefit when the state protects them from competition,” Ohlhausen wrote, referring to the number of states with CON laws at the time. “CON laws insulate politically powerful incumbents from market forces, and those providers naturally are loathe to give up the special government preferences that CON laws bestow.”

4. Health care is more expensive, quality is lower, and access is scarcer in states with certificate of need laws.

An exhaustive study published in 2016 by the Mercatus Center at George Mason University found that in states with CON laws, the cost of healthcare is higher, the quality is lower, and access is scarcer. Even the American Medical Association advocates repeal of CON laws. The AMA concludes CON laws “have failed to achieve their intended goal of containing costs,” restrict patient choice, and do nothing to improve the quality of healthcare.

The AMA agrees with federal regulators that the primary beneficiaries of CON laws are existing providers, who effectively use them to prevent competition that would force them to control costs and improve quality. “CON programs tend to be influenced heavily by political relationships, such as a provider’s clout, organizational size, or overall wealth and resources, rather than policy objectives,” the medical association says.

The bottom line for the AMA: “CON laws represent a failed public policy.”

5. Pressure is growing for states to scrap certificate of need laws.

Congress linked federal funding to state passage of CON laws in 1974. By 1980, all states except Louisiana had them. But soon thereafter, it became clear that the national experiment in cost control was a failure. Amid the growing evidence that CON laws were a failure, Congress repealed the directive to states in 1987. Since then, 12 states have eliminated their CON laws, most recently New Hampshire in 2016. Indiana imposed a new CON requirement earlier this year.

The FTC and Justice Department have pressured other states to scrap their CON programs for more than a decade, through both Republican and Democratic presidential administrations. In 2004, the agencies jointly published an extensive study on the effects of CON laws and concluded the primary beneficiaries were entrenched special interests—existing medical providers in communities—who used their political clout to preserve the laws and protect themselves from would-be competitors.

Finally, the FTC and DOJ reject the other oft-cited justification used to defend CON laws: that limiting competition protects the profitability of existing providers and thereby allows them to subsidize charity care. “Empirical evidence contradicts the assertion that dominant providers use their market power to cross-subsidize charity care,” the FTC stated in an October 2017 letter to state healthcare regulators.

Read more about the consequences of certificate of need laws in CON Job: Certificate of Need Laws Used to Delay, Deny Expansion of Mental Health Options

More on this issue
Healthcare