Do businesses get the short end of the stick when it comes to funding political campaigns?

In six states, unions can contribute up to $15,000 to political campaigns, but businesses are completely barred from giving anything. These unfair laws are unconstitutional at both the state and federal levels and violate guarantees of equal protection, free speech, and free association. The Goldwater Institute is challenging Massachusetts’ and Kentucky’s contribution bans to protect the rights of businesses to be included in the political process. The Goldwater Institute was in the state of Massachusetts this past Tuesday for oral arguments in the Massachusetts case, 1A Auto v. Sullivan.

Goldwater Institute Senior Fellow Jim Manley appeared on New England Cable News’ The Take with Sue O’Connell earlier this week to argue that “whatever rules apply to unions should apply to the other side of the bargaining table as well.” He said that because unions and union members are able to give to campaigns, then businesses and employees should also be able to contribute in the same manner. 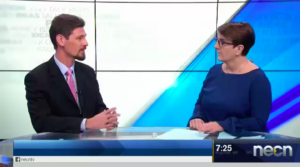 Manley argued that businesses should at least be allowed to have political action committees. These committees would allow employees that wanted to contribute to the business’s political agenda to do so while those that don’t want to contribute wouldn’t have to.

“In our country, equality under the law is an important principle, and that’s what were trying to protect here,” Manley said.

More on this issue
Free Speech