Week in Review: A One-Stop Shop for Liberty

Drumroll please…We’re thrilled to announce the launch of our new website! As the Goldwater Institute leads the fight for America’s future, it’s crucial that we harness the latest in 21st-century technological innovation to counter the left’s message of government dependency and despair with one of freedom and hope. That’s why we’ve redesigned our site into a more effective digital tool to spread our work to defend liberty in courtrooms and capitols around the nation. 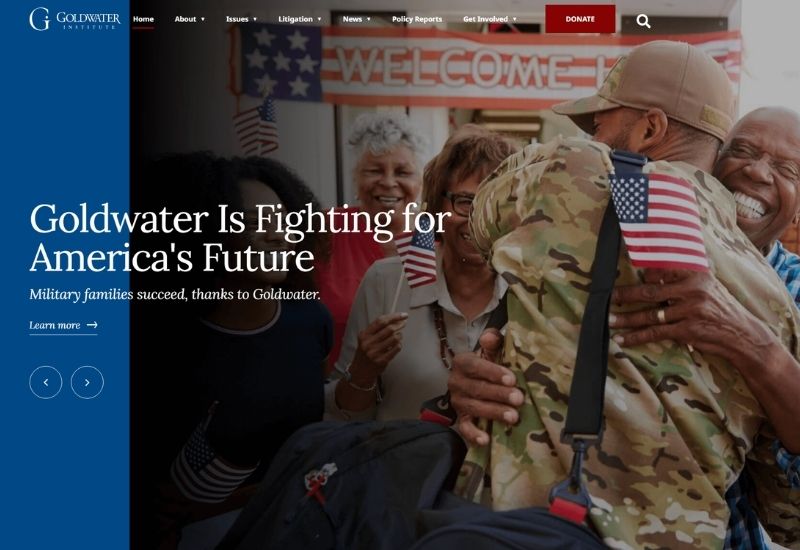 You can still find us at GoldwaterInstitute.org, but you’ll notice that it’s much simpler to navigate our site. You can seamlessly toggle between our main issue areas, read up on the Institute’s latest news, explore the cases we’re litigating, delve into our policy reports, and watch exclusive videos with ease. And our In Defense of Liberty blog isn’t going away—just select the “News” tab and click on the “Blog” option to read hard-hitting commentary from Goldwater’s team of litigators and policy experts.

Our new website is a one-stop shop for all things liberty. So take a look around! We’re excited to launch this new chapter, and we’re confident it will help us further our mission to empower Americans to live freer, happier lives.

You can check out Goldwater’s new website for yourself here.

It was unconstitutional from the start, and California Gov. Jerry Brown knew it.

Senate Bill 826—which forces any corporation incorporated or even just headquartered in California to have a minimum number of women on its board of directors—raised “serious legal concerns,” Brown admitted when he signed the bill into law in 2018. Nevertheless, Brown said he signed the legislation because it was “high time” that businesses have a minimum number of female board members. That decision was typical of a mentality that has held women back for generations: the condescending attitude that women can’t make it on their own—and that their freedom, or that of their male peers, should be limited “for their own good.” Fortunately, a state judge agreed with Gov. Brown last month, and struck SB 826 down as unconstitutional.

But how many women on a board is “enough”? And who should decide what positions women should hold: politicians—usually male—or women themselves?

Let Students Study for Final Exams, Not Worry About College Board Politics

It’s final exam season, so middle school and high school students are feverishly preparing. In case students needed one more thing to worry about, some in the media are warning that students’ hard work studying for end-of-year tests may not even count—for political reasons.

A recent statement from College Board, creator of Advanced Placement courses and exams, says AP work stands for “clarity and transparency” and an “unflinching encounter with evidence,” and “opposes censorship.”

Some in the media have interpreted that to mean that when state lawmakers reject the application of Critical Race Theory in K-12 schools, educators may not be able to fulfill the requirements of teaching AP courses.

In fact, College Board—and the media and parents—should be more concerned with the racial bias that Critical Race Theory is ushering into K-12 classrooms than state officials’ proposals that reject the theory.

Read more from Goldwater Institute Senior Fellow Jonathan Butcher on our In Defense of Liberty blog.