Week in Review: A Thank You...and a Promise

Freedom is worth fighting for: the freedom to live our lives the way we see fit, and to reap the blessings of liberty.

In this season of goodwill and giving thanks, we should reflect on what it takes to protect this freedom—lest we take it for granted, Goldwater Institute President and CEO Victor Riches writes at In Defense of Liberty. We’re eternally grateful to everyone who has made sacrifices to defend liberty—from the service members who have put their lives on the line to the everyday patriots who have taken a stand for freedom.

“Until the great American experiment, the sort of freedom these patriots defended was the exception, not the rule. Until our forefathers founded a nation based on a simple, yet revolutionary ideal: that the right to life, liberty, and the pursuit of happiness—the right to live your American Dream—is for everyone,” Riches writes.

Whether they’re fighting for patients’ right to try to save their own lives, for parents’ right to direct their kids’ education, or for hardworking Americans’ right to earn a living, we’re grateful for our brave patriots’ courage—and we pledge to stand alongside them in defense of liberty.

How to Beat the ‘Biggest Bully in School’

They’re fighting back to free families from the public education apparatus’ grip.

Former California public school teacher Kali Fontanilla and Rhode Island mom Nicole Solas, who star in a new PragerU documentary, “The Biggest Bully in School,” know a thing or two about boldly standing up to bullies. Kali spoke out in an exclusive Goldwater Institute video after discovering that her public school was forcing the falsehoods of Critical Race Theory (CRT) down kids’ throats. And Nicole refused to back down even after the nation’s largest teachers union sued her for trying to find out what her daughter would be learning in kindergarten.

“America needs to see what’s happening in our classrooms, and how our teachers are trained to be racist, and how a lot of this is being pushed by the teachers unions,” Kali says in the movie. That’s why Kali and Nicole are advocating for the Goldwater Institute’s policy solution, a landmark Academic Transparency law that opens the books on radical classroom content by requiring public schools to post a listing of their learning materials online.

“[Public education bureaucrats] don’t know what to do when you fight back. They don’t have a plan B,” Nicole tells parents. “So fight back.”

The Goldwater Institute’s Breaking Down Barriers to Work reform has empowered thousands of people to shape their own destinies in the career path of their choice. Now this groundbreaking reform’s immense impact is being recognized with the Atlas Network North America Liberty Award, which Goldwater Director of Strategic Engagement Heather Curry accepted recently on the Institute’s behalf. 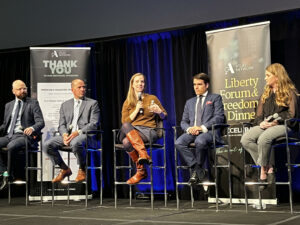 Currently, about one in four Americans is required to obtain a license just to do their job—and when a licensed professional moves to a new state, they are often forced to go through the costly and time-consuming licensing process all over again. But Breaking Down Barriers to Work, which Goldwater enacted in 2019 in Arizona before passing it in more than 20 other states, ensures qualified professionals’ occupational licenses are honored when they move to a new state. It’s already empowered countless Americans—including thousands just in Arizona—to exercise their right to earn a living.

Read more about Breaking Down Barriers to Work here.

Giving Tuesday: Give the Gift of Liberty

America’s founders envisioned a constitutional government with limited powers and strong protections for individual liberty. It’s a vision that requires robust support for private institutions that build bonds of trust and charity to help our neighbors and do good—and that’s why we’re asking you to consider making a special gift to the Goldwater Institute this Giving Tuesday.

Over the past 35 years, the Goldwater Institute has become the nation’s leading organization in defending the rights of taxpayers, entrepreneurs, parents, students, and patients. We’re winning more freedom for more Americans, and Giving Tuesday presents an opportunity for you to support our mission.

You can make a tax-deductible donation to the Goldwater Institute here.