Across the country, special interests are mobilizing to raise taxes, increase government spending, circumvent the legislative process, and rip power away from voters. But the Goldwater Institute is leading the nation in fighting back with two key victories on Election Day.

The Goldwater Institute championed two triumphant Arizona ballot measures that will stop statist forces based out of liberal havens like California from spending millions of dollars to buy their way onto the ballot. Goldwater successfully spearheaded a statewide campaign in support of Prop 132, which requires a 60% majority vote before any tax hike can be approved at the ballot, ensuring a high bar of approval from the taxpayers who will actually be footing the bill. And Goldwater and its coalition allies helped lead the effort to pass Prop 129, which amends the Arizona Constitution to require ballot initiatives to be limited to a single subject. That way, special interests can’t mislead voters by pushing ballot measures packed with multiple, often unrelated changes to the law.

It should never be easy for special interests to increase taxes on businesses and families—especially with inflation and gas prices at sky-high levels, and with a recession looming just over the horizon. That’s why the Goldwater Institute is proud of our work to defeat special interests’ attempts to remake Arizona in their image. And under our watch, leftists will never be able to turn Arizona into the next California.

It’s just another example of how Goldwater is creating a blueprint for the nation on how to fight higher taxes, rein in big government, and hold the line on constitutional government that is responsive to the people.

Violent criminals roaming free. Businesses plundered. Livelihoods smashed into bits. It’s a scene that’s playing out in cities from San Francisco to Phoenix, and Chicago to New York City. But in one Arizona county, citizens are taking action.

Law-abiding Tucson residents fed up with the plague of violent crime and rampant homelessness have forced their government leaders to listen to their concerns and take much-needed action to enforce the law. On Tuesday, the Pima County Board of Supervisors heard over three hours of horrifying testimony from business owners who highlighted the threats to their businesses and personal safety. Then, the board unanimously and in bipartisan fashion passed what are being dubbed “baby steps” in the right direction—steps that include arresting and prosecuting anyone who violates public health and safety laws.

The hearing, which Goldwater Institute Municipal Affairs Liaison Austin VanDerHeyden spoke at, is a welcome first step—and one that the board’s counterparts on the Tucson City Council need to replicate. So too should the Maricopa County Board of Supervisors and the Phoenix City Council, whose refusal to enforce the law or even hear their constituents’ stories has forced citizens to sue the city of Phoenix for maintaining a public nuisance. (The Goldwater Institute has filed a brief in support of these citizens’ rights.) Whether it’s Tucson or Phoenix—or anywhere in the country—this crisis can only be solved if elected officials listen to their constituents and protect their rights.

Read more from VanDerHeyden at In Defense of Liberty.

Why Did the Government Take Their Money?

“How could the government do this to us?”

Vera and Apollonia Ward aren’t criminals—they’re entrepreneurs pursuing their American Dream as small business owners. But as the sisters write in The Orange County Register, the government still seized $17,500 of their hard-earned money and maligned them with a bogus accusation of drug trafficking. “It’s all because of a law called civil asset forfeiture. Under that law, the government can seize innocent people’s property if they merely suspect it was used to commit a crime,” the Wards say.

“We’re pro-law enforcement, and we think it’s important to equip police with the tools they need to crack down on crime,” they add. “But that’s not what’s happening with these laws.”

The Goldwater Institute got the Wards their money back, and now these sisters, like many other innocent Americans Goldwater has helped, are demanding change: “We want the government to stop using civil forfeiture laws to steal from law-abiding citizens.”

Read their op-ed in The Orange County Register. 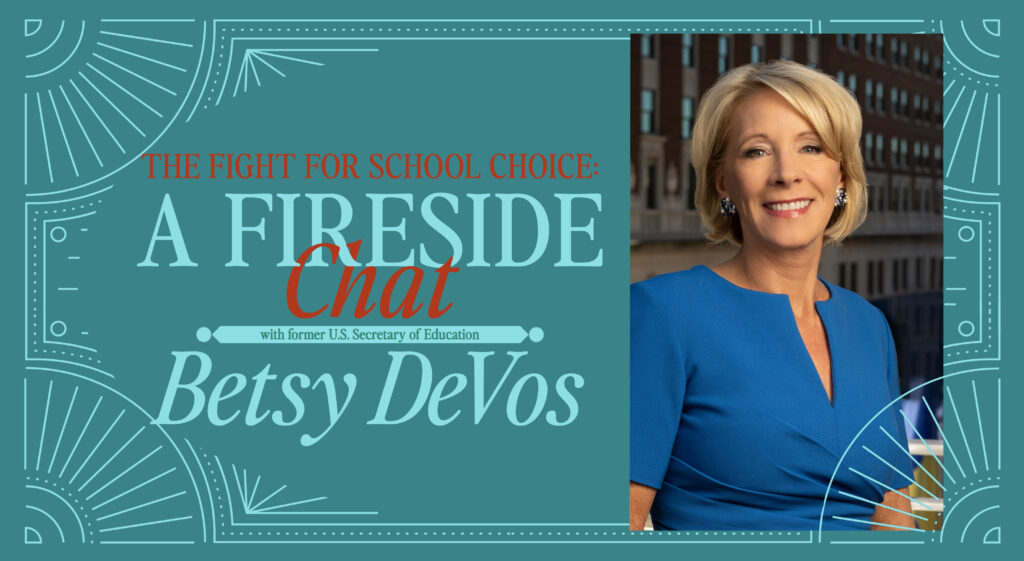 Secretary DeVos is one of the nation’s most influential advocates for school choice, due process, and protecting free speech on campus, and the Goldwater Institute is leading the nation in fighting for parents’ right to direct their children’s education. During their fireside chat, Secretary DeVos and Goldwater President and CEO Victor Riches will discuss how Goldwater was able to achieve this success, and what the future of the school choice movement looks like.

Register here for “The Fight for School Choice: A Fireside Chat with Secretary Betsy DeVos.”