Is the FDA Making the Pandemic Worse for the Most Vulnerable?

We are now in the middle of our third COVID summer and our sixth wave of rising cases and hospitalizations. Despite the development of effective treatments, the federal government is refusing to remove bureaucratic rules that hinder the fight against COVID. The Food and Drug Administration’s (FDA) policies are undermining the COVID battle, leaving the most vulnerable patients unable to access the help they need.

Early this year, the FDA approved, with restrictions, Pfizer’s Paxlovid and Merck’s Molnupiravir COVID-19 oral antiviral drugs. These treatments, intended to be taken within the first five days of infection, have been shown to greatly reduce the risk of hospitalization and death—by up to 80 percent for Paxlovid and 30 percent for Molnupiravir. A large study performed in California showed that hospital admissions for COVID-19 occurred among less than 1 percent of patients who received the antiviral treatment with Paxlovid.

These innovative treatments are working. But the government isn’t letting enough people access them—even as hospital admissions continue to rise six months after the release of these antivirals.

As of May, the Centers for Disease Control and Prevention (CDC) found that 88 percent of the U.S population resides within 5 miles of a dispensing site for these antiviral drugs. But COVID patients living in areas known to be at higher risk for poorer health outcomes are having the hardest time accessing effective treatment, and the FDA’s policies are to blame. In fact, Americans living in zip codes that the government considers to be the most vulnerable were 50 percent less likely to access the drugs compared to those in less vulnerable areas.

To access one of the oral antiviral drugs, a patient must first receive a positive test result for COVID-19, then obtain a clinical assessment by a healthcare provider who has a license to prescribe the drug (i.e., physicians, registered nurses, and physician assistants). However, studies have shown that 25 percent of Americans do not even have a primary care physician. And until recently, most pharmacies serving as dispensing sites did not have authorized prescribers available on-site or via telemedicine.

Aiming to expand access to these COVID drugs, the federal government implemented the “Test to Treat“ program on March 7 of this year—around the same time that the majority of these antivirals began to be dispensed. The Test to Treat facilities removed many of the barriers to obtain treatment: people can get tested, receive their prescription from a healthcare provider (either on-site or through telehealth), and have the prescription filled all at one location. Unfortunately, Test to Treat programs only account for 6 percent of all oral antiviral dispensing sites in the United States, meaning most locations still require a sick patient to jump through FDA hoops to access one of these treatments. 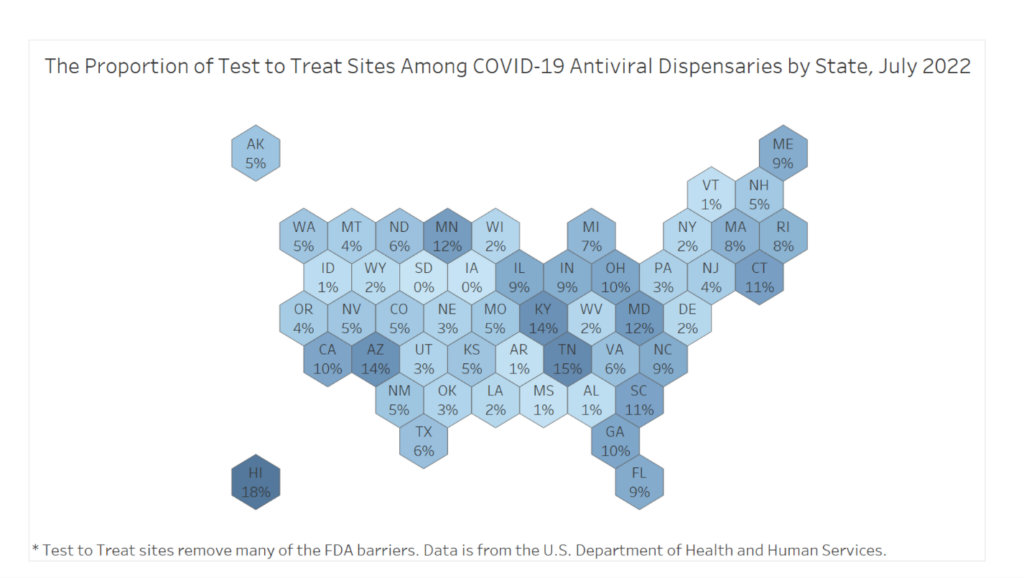 On July 6, days after the CDC released its conclusions on FDA restrictions and the implications they may have for individuals who reside in higher-vulnerability zip codes, the FDA granted licensed pharmacists the ability to prescribe the antiviral drugs. It was a major step in the right direction. Pharmacists are extremely knowledgeable of certain drug interactions that can occur with Paxlovid, and more than 80 percent of dispensing sites are pharmacies, which help expand access to treatment.

However, there are still major limitations, particularly when it comes to prescribing power and the significant burdens on sick patients.  A person seeking the antiviral drug from a pharmacist, for instance, must still bring a positive COVID test, an updated health record that is less than 12 months old, a recent report on blood work, and a list of all current medications.

In March, a study showed that among high-risk respondents who tested positive for COVID-19, 36 percent sought treatment, but only 1.6 percent accessed the anti-viral drugs. Considering more than 80 percent of Americans live in high- and medium-social-vulnerability zip codes, the impact of the FDA placing these barriers for almost six months has no doubt been catastrophic. The financial cost alone of just a single hospitalization due to COVID-19 ($21,000) is thirty times or more higher than that of either Paxlovid ($529) or Molnupiravir ($707).

Federal officials’ missteps and miscalculations early in the pandemic were one thing. But after more than two years of experience and with more COVID waves to come, policymakers need to cut the bureaucratic red tape that’s preventing Americans at risk of hospitalization from accessing these drugs. As Goldwater Institute Vice President for Healthcare Policy Naomi Lopez wrote in The Hill earlier this year regarding the FDA’s regulations for these antiviral drugs: “What could have been a one-stop shop turned into a complicated, time-wasting, and meaningless chase for the patients most vulnerable to COVID-19.”

It’s past time that the agency changed course and put patients first.

Amanda Hagerman is Healthcare Policy Analyst at the Goldwater Institute.

More on this issue
Healthcare