When Government Employees are Paid NOT to Work

This is a practice known as “release time”—and it’s far more prevalent than any of us know. The Goldwater Institute is working to expose the truth about release time and is fighting to put a stop to it. Here’s what you need to know about the practice and how it affects workers and taxpayers across the country.

What is release time?

Release time is a practice that occurs on the local, state, and federal level by which government employees are “released” from the jobs they were hired to do and instead work full-time for their respective unions, while still receiving their full salary and benefits paid for by taxpayers. So that means that a teacher on release time does not spend their time educating students, but instead spends their time negotiating higher wages, participating in political activities, and attending union conferences.

Why is release time a problem?

Release time is not only unfair to taxpayers—it’s also unconstitutional. The union-supporting activities that government employees take part in while on release time do not fit the definition of a public benefit—they’re benefiting a private union. In fact, union officials typically do not even need to say what they are doing while on release time, so the practice lacks the transparency needed to keep these officials accountable.

And because it doesn’t deliver a public benefit, that means that release time actually violates most state constitutions. The vast majority of states include a “gift clause,” which says that public money can’t go toward private organizations. It’s pretty clear, then, that when taxpayer dollars are funding private union work, that’s a violation of a state’s gift clause.

Release time trespasses on taxpayers’ First Amendment rights, forcing them to fund activities with which they might not agree. In Janus v. AFSCME, the U.S. Supreme Court ruled that government employees could not be forced to pay dues to a union. This decision gutted unions’ arguments in favor of release time—neither government employees nor taxpayers should be compelled to pay for speech and activities they don’t support.

Release time is widespread across the U.S.

In states, cities, and school districts across the country, taxpayers are paying public employees to work exclusively for their private unions, instead of doing the jobs they were hired to do. The Goldwater Institute analyzed the practices of 150 jurisdictions, three in each state, to learn about their specific release time practices. We have documented more than 400,000 hours of paid release time taking place every year. But this number does not even come close to the actual number of hours public employees expend on their union—because many governments simply do not keep track of release time hours. Learn more in the report Money for Nothing: Taxpayer-Funded “Release Time” Gives Government Employee Unions No Work and All Pay. 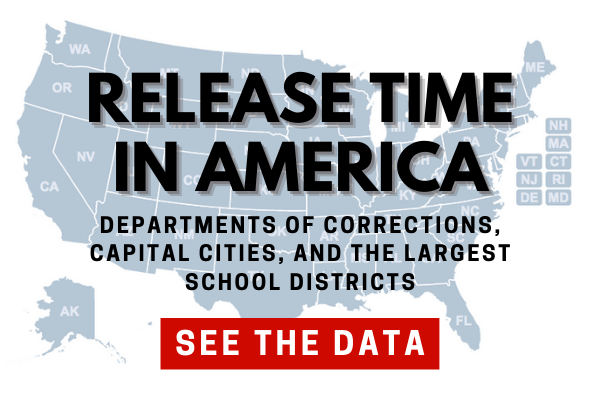 Governments do not track release time

Unfortunately for taxpayers, many states, cities, and school districts, clearly defining how much government-paid release time is granted to the unions, and accounting for the hours and cost, is just not done, as we found in our recent report.

Read more in the report Failure to Track Release Time Leaves Taxpayers in the Dark.

What do government employees do when they’re on release time?

It’s hard to know what Michael Imondi, the president of the police union in Providence, Rhode Island, does all day. He is carried on the city’s payroll as a police officer in the patrol division, assigned to “Car 76.” He draws full pay and benefits from the city, just like any other cop. And yet he cannot be assigned any specific duties, hours, beats, or posts. It has been years since Imondi has worked the streets as a regular patrolman. Instead, his job with the city is to work full time for his union, the Fraternal Order of Police’s Providence Lodge #3. Imondi is on paid union release time, and he is just one example of the problem with release time. Learn more in our report, What Do These Government Workers Do All Day?

What’s the point of release time?

Union release time is supposed to bring “labor peace” to the states, cities, and school districts that pay union officials to do union work. It did not turn out that way in April 2018, when an estimated 75,000 school teachers and support personnel throughout Arizona walked off the job for more than a week demanding higher pay as part of the union-backed “Red for Ed” movement. The protests amounted to a statewide teachers’ strike that forced the closure of more than 1,000 schools and affected about 850,000 students. Teachers won a 20% pay hike, schools reopened, and there were no consequences for either the teachers or the unions that helped organize and encourage the walkouts. It’s not supposed to happen that way. Find out more in the report Taxpayers Lose and Unions Win in “Labor Peace” Bargains.

Union money, organization, and endorsements are powerful campaign tools, especially in local races such as city council and school board elections where voter turnout is notoriously low. Release time allows union officials to spend their days getting favored candidates elected. Since their salaries are paid by the taxpayers, the money collected from union dues is freed up to spend on other things, including more electioneering. Once those union-friendly candidates are in office, they are unlikely to cross the organizations that helped put them there, or to limit the release time they directly benefitted from. Read more in the report The Political Power of Government Unions.

Perhaps the most direct mechanism to challenge release time is strategic public interest litigation; that is, challenging release time provisions in collective bargaining agreements and the public expenditures made pursuant to those provisions in court. Litigation challenges can be predicated on one of two legal claims, which can be brought separately or together, depending on a state’s particular jurisprudence, standing doctrines, and the characteristics of the plaintiffs.

New Jersey taxpayers—represented by the Goldwater Institute—filed a case challenging a collective bargaining agreement in Jersey City which required a school district to pay the salaries of two full-time teachers who did not spend their time educating children, but instead performed full-time union work. In August 2019, the New Jersey Court of Appeals sided with the taxpayers. In its ruling, the Court of Appeals said that these teachers were “act[ing] exclusively as labor leaders,” rather than as “teachers who serve the day-to-day educational needs of the students of the district.” The court ruled that the practice is not authorized by statute, is “against public policy,” and that public funds can no longer be used for release time. The case came before the state Supreme Court in October 2020, and we are currently awaiting the court’s ruling.

Additionally, in Austin, Texas, the Goldwater Institute is challenging a collective bargaining agreement allows the equivalent of up to four full-time firefighters to be released from their very important jobs and instead go to work exclusively for their labor union.

Read more about how release time can be fought in court in our report Litigation and Legislative Solutions to Taxpayer-funded Release Time.

Legislative reforms can also be pursued separate from or in addition to legal challenges. These can be achieved at the state or local level though statutory changes or the passage of local ordinances. Legislative reform, of course, is not without obstacles. Because release time is most commonly found in collective bargaining agreements—rather than in statute or ordinance— policymakers are often unaware that the practice exists at all. Reform efforts, therefore, frequently require providing research and analysis to lawmakers on the practice about its costs to taxpayers, workers, and other government priorities. Additionally, public employee labor unions often exercise tremendous influence with policymakers at the state and local level, so legislative efforts should be pursued with an understanding of this opposition. Read more about legislative solutions to end release time in Litigation and Legislative Solutions to Taxpayer-funded Release Time. You can download our Model Release Time Legislation here.