Tick, tock. Tick, tock. By ramming through their $740 billion so-called “Inflation Reduction Act,” President Joe Biden and his progressive allies have planted a ticking time bomb right in hardworking Americans’ front yard. But as Washington politicians spend hundreds of billions of dollars to pursue reckless policies—like increasing IRS “enforcement” and combating the “climate crisis”—that will hurt already struggling American families, the Goldwater Institute is providing a blueprint on how to empower families with choice, instead.

This week, Arizona Gov. Doug Ducey held a signing ceremony for Goldwater’s groundbreaking reform that expands school choice to every family in the state. It’s a new national standard, Goldwater Director of Education Policy Matt Beienburg writes in the Washington Examiner, and one that poses a particularly stark contrast to one of the next items Biden plans to check off on the liberal wish list: massive debt “cancellation” for college graduates who freely borrowed money from taxpayers. 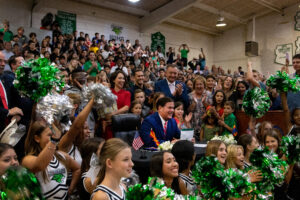 “While school choice empowers families, loan transfer schemes will simply discourage any rational actor from repaying their student loans going forward, knowing that Uncle Sam (or Joe) might wake up any morning and simply waive away those debts—onto others,” Beienburg adds.

A ‘Criminal’ in Kangaroo Court?

“Either we’re all criminals, or the law is not quite right,” Tucson mom Sarra L. tells Reason.

Sarra is not a criminal. But the Arizona Department of Child Safety (DCS) is treating her like one for allowing her 7-year-old son and his 5-year-old friend to play at a safe playground while she made a quick trip to the grocery store. “It’s really shocking,” says Sarra, who’s speaking publicly about her ordeal for the first time to shine a light on an unjust system that robs citizens of their due process rights.

Sarra faced a “kangaroo” hearing where DCS bureaucrats determined she was an unfit caretaker who should thus be placed on the state’s Central Registry blacklist for abusive parents. That’s ridiculous—she had simply entrusted her son and his friend with a reasonable level of autonomy. But while actual courts of law have rules of evidence and a presumption of innocence, the standard for placement on the Central Registry is probable cause—i.e., mere suspicion.

As Goldwater Vice President for Legal Affairs Timothy Sandefur tells Reason: “You have a system that allows the government to blacklist people based on irrational assertions of harming children.”

Read how Goldwater is challenging this system and defending Sarra’s due process rights at Reason.

Protecting the Pursuit of Happiness

It’s the right to earn a living. It’s the pursuit of happiness. It’s the American Dream—and if that dream means anything, it means the freedom to put your skills to work providing for yourself and your family. “Yet today, this idea—one deeply rooted in our nation’s history and tradition—is being neglected, even denigrated, by those responsible for enforcing our constitutional rights: the judges tasked with protecting liberty against arbitrary government interference,” Goldwater’s Timothy Sandefur writes at Townhall.

Dipendra Tiwari and Kishor Sapkota, who came to Kentucky from Nepal, want to open a home healthcare business for other Nepalese immigrants. But Kentucky bureaucrats won’t let them do that until they prove there’s sufficient public “need” for a new company, Sandefur notes, even though it’s impossible for anyone to predict what people will “need” in the future.

Now, Goldwater has filed a brief with the Supreme Court on Tiwari and Sapkota’s behalf, urging the justices to uphold the Constitution’s promise to protect all freedoms—not just those judges consider worthwhile—against legislative overreach. “If the American Dream is to remain meaningful to future generations, it must be protected against irrational government interference no less than other constitutional rights,” Sandefur says. 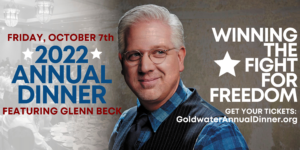